David Davis MP, affectionately known as Basher, is the man in charge with exiting the UK from the EU.

On Wednesday 15 March he faced the Brexit Committee in Parliament.

Ian Dunt, Editor of Politics.co.uk tweeted live from the committee meeting. You can find his long, and at times shocking, thread of tweets here.

Once again, this website will not state any views on Brexit. This website is concerned with Independence for Wales. What form that independence takes is a matter for the people of Wales.

However what’s interesting is that many of the arguments put forward before and after the Brexit referendum, apply also to Wales.

Take back control, for instance. 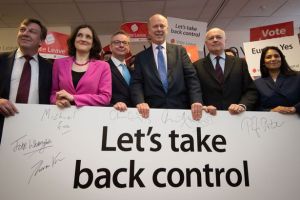 Isn’t that a nice thought for us in Wales!

Or being governed by ‘people that are unelected’, as was said by Bryan ‘Everything I do I do it for the Summer of 69’ Adams, of all people,

Brexit: Are you in or out? Does the UK really want to be governed by people that are unelected?

To be fair maybe he wasn’t aware that the second house was full of unelected peers and that the UK’s head of State is an unelected Monarch. He is Canadian after all.

The Hon Member for the Early 20th Century, Conservative MP Jacob Rees-Mogg, called the EU a “bureaucratic run-by-the-Commission inefficient failed state”, which would be far more pertinent if it was given as a description of the UK.

Or the insufferable tag of ‘Greatness’,

OK, we in Wales have never claimed to be ‘great’. We see it more as an attempt to compensate for something, but we couldn’t possibly say what! But our demand for Independence, while not wanting any greatness, would at least make Wales a sovereign nation once again.

And much more besides.

Anyhow, back to Basher.

But what caught our eye was his response to questions about economic assessments.

Anyone who has promoted the case for an Independent Wales will have, sooner or later (probably sooner) faced the question about what state would our economy be in post Independence. It is demanded from us that we provide a detailed fiscal and economic policy of an independent Wales. Much of those questions can be answered in these posts, and no doubt much more will appear over the next few years.

But many of those very same people who dismiss any notion of an Independent Wales being economically successful are also ardent supporters of Brexit.

When asked about the economic challenges that might face a UK post Brexit people are told that they are talking the UK down or that they lack faith.

Well nine months have now passed since the referendum, and Article 50 will be triggered over the next few days.

So it’s only right that we should get some answers about what assessments have been done into the UK economy post Brexit.

Who should answer such questions? Well old Basher of course, the man in charge of the whole thing.

So what did he have to say?

Has govt undertaken economic assessment of there being no deal? DD: 'If you mean under my time, no.'

DD basically saying they can;t assess because the variables, options and breadth of changes are too severe. Which is exactly the point.

But then we have the pièce de résistance,

DD: Sometimes in business you know a deal is better even when you don't have the numbers.

So there we have it.

Even with such a momentous thing as Brexit, which involves 27 different Nation States, thousands of pieces of legislation; trillions of dollars worth of exporting and importing, Basher has said that the economic argument – the numbers – aren’t needed.

So when someone next challenges you about what an independent Wales might look like economically, what economic impact independence would have, refer them to this paraphrased quote by David Davis MP, “Sometimes in business you know a deal is better even when you don’t have the numbers”. Thank you Basher me ol’ son.