It has been argued many times that the British (English) left have a blind spot for the Celtic nations of Great Britain.

But as we’ve seen time and again the Labour party mainly, but the British left in general, are resolute in their opposition to Welsh, Scottish or Cornish independence.

As has already been noted in previous articles, Corbyn, McDonnell and others support the demands of many stateless nations.

They are Kurdish, Tibetan, Palestinian, Papuan, Chechnyan, and Irish Nationalists, believing in the rights of those stateless nations to self-determination.

Only last June we came to understand that Corbyn was also a Tamil nationalist as well,

“In a written message to the Eelam Tamil people, the Leader of the Labour Party, Jeremy Corbyn emphasised his full support to right to self-determination for Tamils and right to determine their future by democratic means including referenda.”

In fact it seems like Jeremy Corbyn only respects the rights of stateless nations if they demand it at the point of a gun, while those seeking independence through peaceful means are dismissed.

In the post-war period the Labour Party, burdened by colonial guilt, developed what they thought of as an anti-colonial vision. They became supporters of the establishment of Israel. Indeed for many on the Labour left, the creation of Israel was truly revolutionary. As June Edmunds wrote in her thesis ‘The Left’s Views on Israel: From the establishment of the Jewish state to the intifada’

“For people like Bevan and other left-wingers in particular, the idea that Jewish settlement of Palestine was a socialist enterprise was important: ‘for these people [Bevan, Foot and others], those Jews in Palestine were socialists…socialists were creating Israel. The Labour left could not help but be excited’.”

But this Leftist colonial guilt, as we saw previously with Laurie Penny, only went so far. It was, and is, an explicitly ‘British’ colonial guilt. A guilt shared by all of the constituent parts of Great Britain.

Now I don’t want to deny Wales’ roll nor part in British Colonial history. Many Welsh people profited from the plunder gained by exploiting other nations. Indeed many Welsh people fervently bought into the creation of the British State and Empire. There is no denying our grisly part in the history of Empire.

But the British Empire was merely another phase of a history of conquering and colonialism that had been going on for several hundreds of years before the Union Flag was ever created.

There is no burden of guilt for any atrocities done to the first colonies of the embryonic British State.

As has been said at the top of this piece, the Labour Party and the British Left have no qualms with Nationalism, whatever you might hear them say. They positively encourage and support the nationalism in nations beyond these borders. What else is the call for a two state solution in Israel but the encouraging of Palestinian Nationalism, for instance?

So why then do they oppose Welsh, Scottish and Cornish Nationalism? 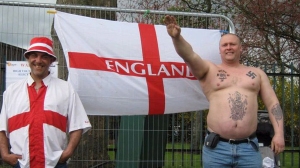 Or could it be that they are in fact not opposed to Welsh, Scottish or Cornish nationalism. Our nationalism is, after all, inclusive and progressive. The truth is if you strip these Celtic nations away from the UK what you are left with is England.

What the Labour Party and the British left are actually fearful of is English Nationalism.

The British left believe that by denying Wales, Scotland and Cornwall our independence, that they are also suppressing English Nationalism.

English Nationalism, as things stand, has an ugly face. It shows its head occasionally within the Conservative Party. UKIP is the most obvious political manifestation of English nationalism today. And we have seen a growing number of far-right organisations aligning themselves with English Nationalism appear, such as the EDL, National Action and others.

In hindsight we should have seen this far earlier. When the Labour Party promised to introduce referendums on various devolution settlements, with the exception of Cornwall, the one glaring omission was any form of devolution for England.

Could it be that Labour were afraid of letting the English Nationalist beast out?

What we have here is what’s called ‘psychological projection’. English Nationalism has a dark and bloody history, dating back a thousand years. When the British left argue that Celtic Nationalism is dangerous and chauvinistic, what they are in fact doing is projecting onto us what has been a trait of English Nationalism from time immemorial.

With the optimism and feel good factor that was in abundance at the end of the last century Labour could have steered English Nationalism to being a more civic and welcoming force, akin to the Nationalism found in the Celtic Nations, a nationalism aligned to Labour’s own supposed principles. Its failure to accommodate devolution for England, however, has resulted in the position that we find ourselves in today – with UK politics driven by chauvinism and xenophobia. And when Labour has articulated English Nationalistic views, it found itself falling back on the kind of nationalism it pretends to loathe.

But it doesn’t have to be this way.

The most surprising thing is that the British Left and the Labour Party in particular, want to keep our Celtic nations tied up to this English chauvinism, and turn down the opportunity of creating genuine beacons of progressiveness in Wales and Scotland.

The truth is that while the United Kingdom continues, and England is denied her own self-rule, then English Chauvinism will only become stronger.

There is a way of defeating English chauvinism and that is to give the nations of the United Kingdom their independence; let them live as equals; and let England flourish in her own right. English nationalism could then become a force for good, a progressive force, which is currently being squeezed out by the regressive forces.

But while England is denied the right to self-determination then we should all fear for what this manacled beast could become.

Britain and more to the point England is going through a metamorphosis, and Brexit is merely the cocoon stage. We should all be frightened of what might emerge.

3 Comments on By denying England her Independence, they’ve created a monster